skip to main | skip to sidebar

In the spirit of All Hallow's Eve, here's a tongue-in-cheek poem.

We are hungry,
licking our chops,
grumbling bellies.
Move over.
We wonder if they’ve paid their dues,
climbed over corpses,
kicking aside what no longer serves,
gorging on the deceased.
It’s a bloody affair.
We wipe the mess from our mouths
with our shirt sleeves.
You’ve gotta feed the fire of creation
with the rotting withered writers,
the eliminated ones.

I’ll shove you off the cliff,
drown you at the bottom of the lake,
but you’ll be there in the acknowledgements,
couldn’t have done it without you.

Posted by yasmin at 4:36 PM No comments:


Ibrahim and Ishmael side by side,
tired eyes and
winning smiles,
100-watt bright.
Each takes his turn, polite as you like.

Balance the budget
restore jobs, borrow from China
or adieu to big bird,
tighten your belts,
recession is here,
we gotta dive in.

I did it for you…
Think of the children!

The best you can hope for,
all we have to offer you.

What of Gitmo?
Let's not talk about that. 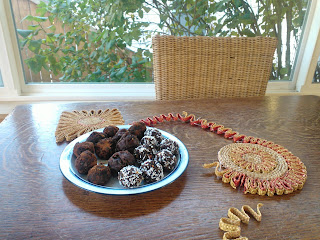 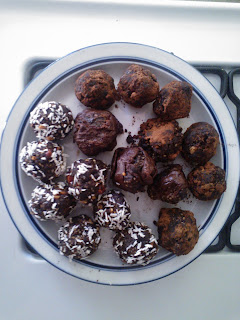 I wanted to make carob treats because chocolate is supposed to be not-so-great if you have acid reflux (heartburn).

Enter these carob truffles, made with carob powder. Tasty, and pretty decent from a health perspective. They have an unexpected ingredient that makes them the ultimate hippie confection: everyone's favorite wonder grain, quinoa.

You can learn more about good eating habits for acid reflux here.
Posted by yasmin at 8:17 PM 1 comment: 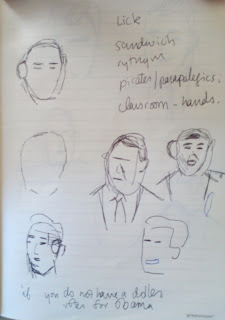 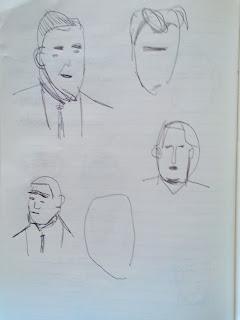 We went out to watch the debates yesterday. The guy next to me was drawing Mitty and Obam-bam so I followed his lead. His results were more impressive. Romney is all about the hair and the strong jaw. Obama has round protruding ears. Both have 100-watt smiles but tired eyes.

The writing at the top were notes about a poem (unrelated). The bottom is a quote from a Real Change vendor selling papers downtown. His non-election version is "If you do not have a dollar, I'll take a twenty."
Posted by yasmin at 11:14 AM No comments:

I'm going to try experimenting with posting excerpts or vignettes here and see how that goes.
*

Across Lake Union, her unbuttoned cardigan blowing in the breeze as she pushed the pedals so she had thin brown wings propelling her as she rode. Light and nimble, it wasn’t hard to imagine her as a mythical winged being. She hovered at intersections every so often, waiting for me to slog up hills which minutes ago she’d effortlessly summitted, not breaking a sweat. In between panting I appreciated the view of the towers of downtown Seattle as the sun sank. We were high above, parellel to I-5 on a skinny bike trail I hadn’t known existed. A blonde man thoughtfully dressed in dark denim and button-down shirt paused to snap a picture on the sidewalk.
Posted by yasmin at 9:04 PM No comments: 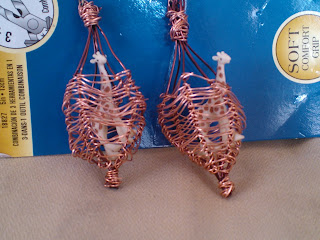 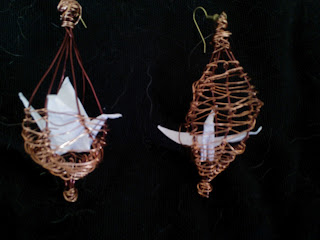 Hi friends! At the encouragement of my beautiful sister, I'm going to stick some things back up here for a few days and see if I'm ready to get back into the blog groove. I think it'll be mostly photos of art/craft things I'm working on. Welcome.

These are some earrings I made recently using a wire-weaving technique.

Maikel Nabil is an Egyptian blogger who was imprisoned for insulting the army. He's since been released, but this blog post was a mirror of the one he'd written that got him sentenced.

You can read Maikel's original post, or an English translation here.

Posted by yasmin at 3:38 AM No comments:

UPDATE: Maikel Nabil was sentenced to three years in prison today, one day earlier than sentencing was scheduled, in the absence of both his lawyer & himself.

Maikel Nabil was arrested from his house March 28, 2011 by military police. He faces the charge of offending the army and spreading false news that could threaten public security.

Nabil is an activist who wrote a blog post entitled, "The army and the people were never one hand," and provided details of the Egyptian army detaining and torturing protesters.

Nabil is also vocally pro-Israel and resisted getting conscripted into the Egyptian army. This makes Maikal Nabil a clever choice to be targeted by the army because 1) it will be hard uniting people against his arrest 2) it will generally discredit people who speak out against the army. We need to work hard in condemning his arrest and show the army their intimidation tactics intended to silence people from speaking out about military detainees and torture won't work.

Information about Maikel Nabil's case gathered from @rago_legal and @elnadeem. @AalamWassef contributed with some analysis.
Posted by yasmin at 3:54 PM No comments:

Occasional art, comics, food, and other things of less interest to the general public.

yasmin
A Cairene transplant in the Pacific Northwest - Seattle.

Some of my favorite posts